Continuing the idea started in October of showing how is going the development in Monitorix 2.0, the following is a new list of the graphs implemented since the last post and their features:

This graph has been rewritten completely and it now supports the latest version of the HP (Hewlett-Packard) System Health Application and Command Line Utilities for monitoring all the HP ProLiant systems (8.6.0 of 10-Sep-2010 at the time of writting).

Since the new generation of HP servers include a lot of temperature sensors, this new graph includes the ability to let you choose which ones you want monitor and in which place they must appear (following the standard Monitorix layout):

This is the new name of the old lmtemp.rrd, and it also has been completely rewritten to hold a lot of new information. Due all of this the layout of this graph has been extented. The following is the list of its features: Currently the NVIDIA cards are the only supported for the GPU temperature sensors. 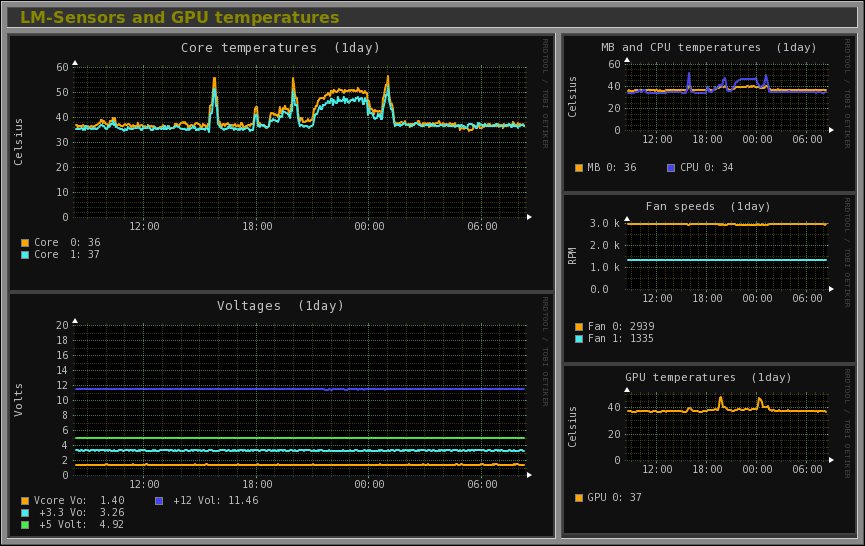 This is a new graph that takes the name of what it was a different one. It now uses the smartmontools including the disk drive temperatures and the two most relevant health values; the Reallocated Sectors Count and the Current Pending Sectors. The following is a screen shot of the new graph:

This is the same graph that was called previously as disk.rrd. It has been optimized its own internal structure and extended the number of supported mount points:

Nothing new in this graph, just the increment of the number of supported network interfaces: